Film, Drama
Recommended
4 out of 5 stars 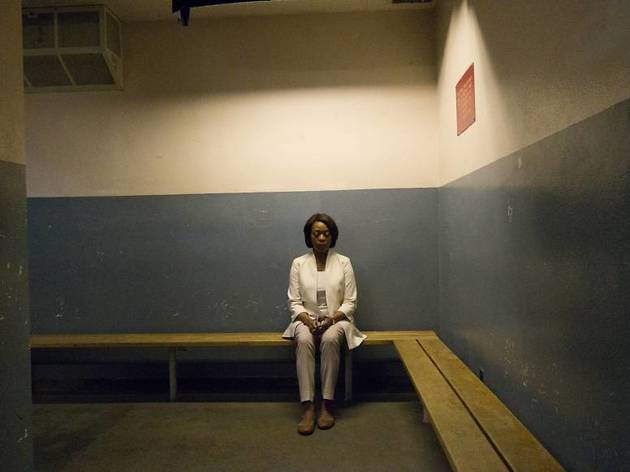 Anchored by a stunning Alfre Woodard, this excellent, austere death row drama unpeels the human cost of the death penalty

This tough, austere but deeply human death row drama reaches an emotional crescendo in a single, unblinking two-minute shot. It fixes on the initially impassive face of prison warden Bernadine Williams (Alfre Woodard) in medium close-up as she presides over an execution by lethal injection. There are no words spoken, just the beep-beep-beeping of the victim’s dwindling vital signs. But slowly, via the subtlest increments and tics, that professional mask slips away to betray a jaw-dropping gamut of buried emotions: horror, empathy, pain and, finally, utter defeat. You barely notice to begin with; by the end, you’re left wondering whether, in some way, two people in the room have died.

It’s a staggering piece of acting – a Carl Theodor Dreyer-like moment in a film you could easily dub The Passion of Warden Williams – and the moment crystallises not only why the under-heralded Woodard was so unlucky to be overlooked by the Oscars (her only nomination to date came for 1983’s Cross Creek), but the lonely, personally ruinous road this seasoned professional has to walk as she oversees the inching conveyor belt of death and all its attendant legal dances and last-meal-type rituals.

The moral and ethical debates around the death penalty rarely touch on the toll it takes on the people involved, but that’s the grey area gifted writer-director Chinonye Chukwu explores with a humanist’s touch and an keen ear for all her characters. It’s anchored by Woodard’s minimalist, magnetic performance as the jaded Williams, numbed by her work, floundering in her marriage to her frustrated teacher husband (Wendell Pierce), and heading to the bar after work with increasing frequency, hoping to treat her PTSD-fuelled insomnia with booze. A distressingly botched execution (it deserves its own trigger warning) has brought unwanted media attention and left fissures in her close-knit team. Another execution is in the offing: convicted cop killer Anthony Woods (Aldis Hodge), whose innocence is protested every day by a group of vocal protestors outside.

While Clemency shares a few of the familiar beats of a race-against-the-clock legal thriller – the deus ex machina here is a phone call from the governor’s office which may or may not provide an eleventh-hour reprieve – and Woods’s potential innocence is a lingering question mark throughout, the focus is on people not systems. Everyone – lawyers, priests, medical professionals, family members – is being chewed up by the process. The fact that so many of those suffering through this accretion of traumas are African-American delivers a Black Lives Matter subtext in a film that touches on but isn’t sidetracked by the troubled relationship between Black men and the police.

Chukwu spent four years researching the death penalty and that authenticity is evident in every tight, understated frame. She draws terrific performances from the small cast: Straight Outta Compton’s Hodge is terrific as the soulful, tortured Woods; Richard Schiff is dryly compassionate as his burnt-out attorney; and Michael O’Neill is a steadying presence as the prison chaplain trying to provide spiritual balm on both sides of the bars. But it’s Woodard’s film from start to finish. She’s been great for three decades, but this is her best work yet.

In cinemas in the UK and available to stream in the US now.