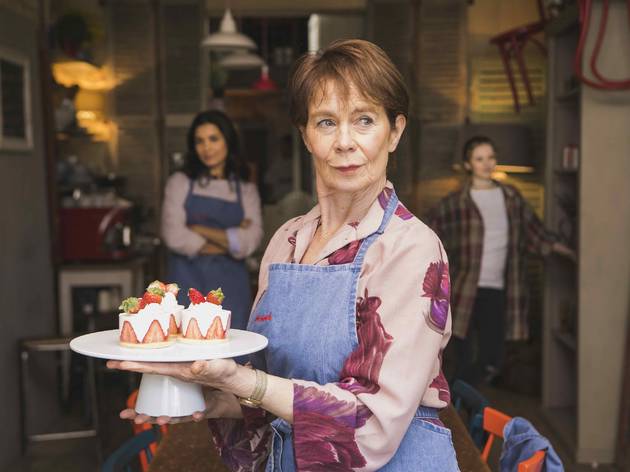 Imrie plays Mimi, a retired trapeze artist – go with it – whose daughter Sarah (a cameo from The Great British Bake Off winner Candice Brown) is tragically killed cycling to recce the premises for a new café she plans to set up with her best pal Isabella (Shelley Conn). Mimi’s granddaughter Clarissa (Beast’s Shannon Tarbet), a drifting wannabe ballerina who smokes too much weed to make pirouetting a long-term career prospect, finds the spark of an idea amid the trio’s grief, gloom and general estrangement: what if they set up the place anyway and named it after Sarah?

Enter Sarah’s dishy ex (a roguish Rupert Penry-Jones), a pastry chef who knows his millefeuille from his madeleine and may or may not be Clarissa’s father. They’ve got the goods but can they lure in the crowds? As Bill Paterson’s Heath Robinson-esque inventor and security specialist (no one in this privileged ensemble has a normal job) wonders: ‘There are four other bakers within five minutes’ walk. What makes yours so special?’

It’s smart of first-time screenwriter Jake Brunger’s script to ask this obvious question so directly and smart of director Eliza Schroeder to answer it by clutching the city’s ethnic diversity to her movie’s heart. While Love Sarah is set in a chocolate-boxy west London, full of quaint mews, dance studios and cutesy boutiques – think Richard Curtis-land, only without all the grit and urban squalor – it’s also a place of community, congregation and diversity. What in normal times might grate – hey, we’re all outsiders together in this vast metropolis! – feels like a timely reminder that actually, we kinda are. Or it might just feel like a Remainer fantasia, depending on your political persuasion.

In the spirit of full disclosure, this masthead features strongly in the plot and it’s tough to be too harsh on a movie that re-avows the earth-shattering significance of a glowing Time Out review. But while Love Sarah is too narratively thin to warrant one of those, its sweetness lingers a little longer than you’d expect.