Go to the contentGo to the footer

Wes Anderson interview: ‘I always try to do something different to what I’ve done before’

The director explains how he lived with his A-list cast while making ‘The Grand Budapest Hotel’ and why he once carried €10,000 in a suitcase for Bill Murray

That shoulder-length, neat-but-not-too-neat hair, that tweed suit, those Clarks ankle boots – is there a film director alive who looks more like a character in one of their own movies than Wes Anderson? He’s the 44-year-old Texan whose films, from ‘Rushmore’ and ‘The Royal Tenenbaums’ to ‘Fantastic Mr Fox’ and ‘Moonrise Kingdom’, radiate hipster style, highbrow cheek and eccentricity.

His new film, ‘The Grand Budapest Hotel’, is his best yet. It’s the story of Gustave H (Ralph Fiennes, seriously funny), a smooth-talking concierge at a 1930s European hotel who becomes caught up in a murder inquiry and some caper-tastic political shenanigans when one of his elderly guests (Tilda Swinton, unrecognisable in prosthetics) dies suddenly.

Anderson is on a roll. In 2012, ‘Moonrise Kingdom’ won him his largest audience ever and an Oscar nomination. Look carefully, and you’ll find his influence everywhere – in lesser, knock-off indie movies, quirky TV ads and the fad for all things crafty and analogue.

Appropriately enough, we meet Anderson, who lives in Paris, in an old-fashioned London members’ club and hotel where even the wallpaper looks as if it’s been borrowed from one of his films.

Does it upset you when people say that you make the same film over and over again? They think they’ve seen it all before.
‘I used to react more. Now I don’t feel especially provoked. I’ve probably got a thicker skin than I used to. When I’m making a film, I’m consciously trying to do something different to what I’ve done before, but when it’s put together, people say they can tell in ten seconds that it’s by me.’

Online there’s a sketch of what ‘Star Wars’ would look like directed by Wes Anderson. It’s basically ‘Rushmore’ but with Chewbacca on a vintage motorbike. Do you watch these things?
‘I’ve seen a few. Edward Norton did one for “Saturday Night Live” that was like a horror movie. It’s nice that they bother. At the same time, I think I could make it a lot scarier. I’d like to have a shot at doing the parody myself and see what I could come up with.’

I read recently that your name was linked with directing the last Spider-Man movie. No disrespect, but surely that wasn’t true?
‘I was never contacted by anybody in any official capacity. I’m sure it’s a made-up internet thing.’

‘The Grand Budapest Hotel’ is your funniest film yet. What made you think Ralph Fiennes could be so funny?
‘He was very funny in the film “In Bruges”, and the play “God of Carnage”. I’d wanted to work with him for some time. I met him maybe ten years ago when I was at somebody’s house and went into the kitchen and he was sitting there. I wanted to find something to do with him. He’s intense. He’s like a method actor, and I’ve not worked with anyone like that.’

Do you enjoy staying in hotels?
‘I used to, but I’ve realised over the years that I don’t like to walk down a long corridor, get in the elevator, walk through the lobby, go down the street and realise I’ve forgotten something. So I’m a bit over it. But writing the film we travelled all over Germany, Austria, Hungary and Czech Republic. We went backstage at lots of places.’

Didn’t you and the cast of ‘The Grand Budapest Hotel’ live in a hotel together while shooting, with the cast wearing their pajamas at breakfast?
‘Yes we took over this small hotel in the city of Görlitz in Germany. We had a cook I know from Italy who cooked for us and we had dinner together every night of the movie. Almost every night was a little buzzing dinner party.’

Lots of faces are familiar from your other films: Owen Wilson, Adrien Brody. And Bill Murray. He’s been in all your films since ‘Rushmore’. What do you like about working with him?
‘I always feel very encouraged by Bill. With each movie he seems a little more into it. I’ve got a very nice ongoing collaboration with him.’

Rumour has it that you once carried €10,000 in a suitcase for Bill Murray on a train from the Venice Film Festival to Rome. Is that true?
‘Yes, it’s true. It was for a man called Luigi and the money was some back rent or a deposit for a flat Bill rented. But I should say that it’s not that hard to carry €10,000. It doesn’t take a whole suitcase!’

Do you and Bill hang out together?
‘Sometimes, but he leads an international life and I don’t know all the aspects of it. Sometimes he’s off the radar for a while and then surfaces. It’s always interesting when that happens.’

You’re from Texas, but you live in Paris. Are you officially an American in European exile now?
‘Well, in fact I haven’t been in America for a couple of years. We’re about to go in a month or so. I have my apartment and my office in Paris, and my girlfriend has a house in Kent so we go there pretty often, and I’m often in London too. But in Paris I still feel like I’m an American abroad. My French is no better than it ever was.’

Do you enjoy the food in Paris?
‘Well there’s foie gras. In France people are very comfortable eating a lot of this stuff. I try to steer myself off it. It’s kind of suicide.’

Growing up in Texas with two brothers, what’s the worst scrape you got into?
‘My older brother and I once decided we wanted to make an entrance to our house through the roof. We cut a hole in the roof into the attic. It took days. My father’s face when he saw it – he was horrified. I can’t remember seeing him like that ever. He couldn’t believe it. We’d cut a hole in the roof!’

Name a skill you wish you had.
‘Math.’

Who are all your all-time movie star crushes?
‘As a kid Farrah Fawcett was having a moment. She struck a nerve with me and my friends. We had a poster of her in a bathing suit. Recently I’ve been watching movies from the 1920s and 1930s. Joan Crawford and Barbara Stanwyck are in half of them. But my new crush from that era is the actress Joan Blondell. There’s a film called “Blonde Crazy” with her and James Cagney. She’s the best.’

Who’s the dead person you’d most like to have dinner with?
‘The Spanish filmmaker Luis Buñuel. I have a feeling he’d be great to be around. He’d like to have fun.’

‘The Grand Budapest Hotel’ is on general release in Paris. 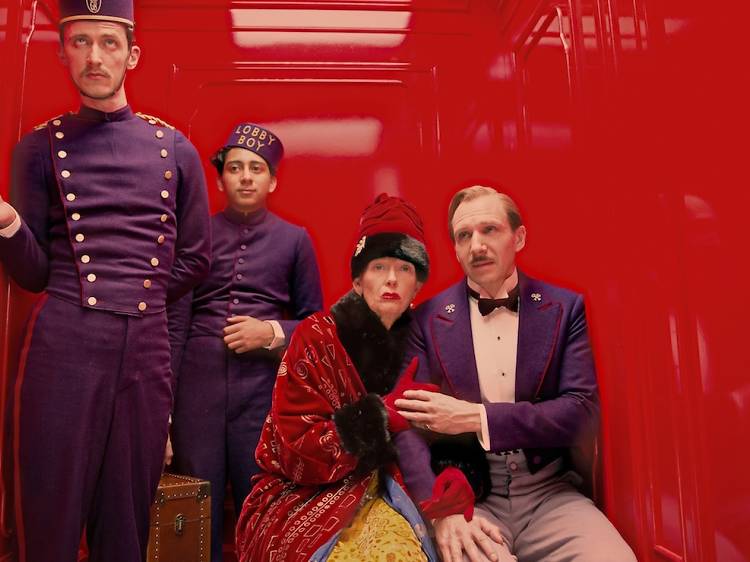 While other filmmakers get their hands dirty in kitchen sinks, Wes Anderson surely slips his into luxury cashmere mittens. His films overflow with intricate detail and make no pretence of existing in a world other than their own, just-about-earthbound parallel universe. So the five-star premises of his energetic new comedy ‘The Grand Budapest Hotel’ – a wedding-cake-like, pastel-coloured establishment situated somewhere in 1930s Mitteleuropa...

Latest from the world of film

Get us in your inbox

Site Map
© 2022 Time Out England Limited and affiliated companies owned by Time Out Group Plc. All rights reserved. Time Out is a registered trademark of Time Out Digital Limited.